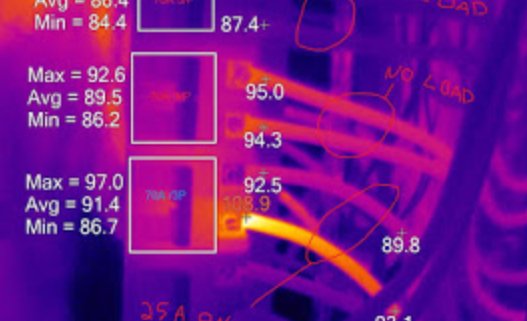 The attached images are from survey at a typical multi-tenant office building.  No visible signs of a problem on this panel with cover on and door open.  This is why we remove covers during IR surveys.

Breaker at top looked normal for no load. Slight heat differential between the two phases but nothing significant.

Breaker in middle was showing heat rise on conductors typical of load, but no measurable load on meter.  This is a result from heat building up in the breaker.

Breaker on bottom had even load on conductors, but (1) conductor significantly hotter than the other.  Either a termination issue or the breaker is failing internally (or both).

E.C. touched conductor while getting load, arcing started to appear behind middle breaker. 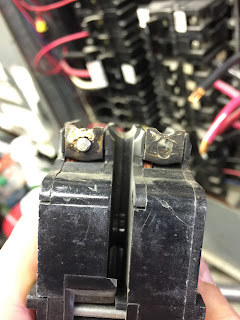 You can see where the arcing was occurring on the other images where the breaker bolted to bus.   Looks like a bright copper weld spot surrounding by carbon deposits.

We left the room, called the property manager to get approval to de-energize the circuit and remove the breakers.   They lost the operation of (1) HVAC unit and can now schedule repair.

This was old federal pacific equipment that has been poorly maintained.   If left unaddressed they would have lost at a minimum the entire panel if the breaker feeding it operated properly.  Most likely increased physical damage to other breakers in the panel and a fault condition that could have tripped a breaker upstream somewhere dropping more load.     This panel also just so happened to be sitting directly above the desk of the facility maintenance personnel, less than 3’ from where his head would be while sitting at the desk.  Code violation but common occurrence in old buildings. 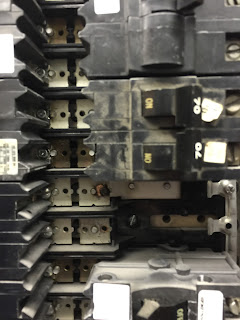