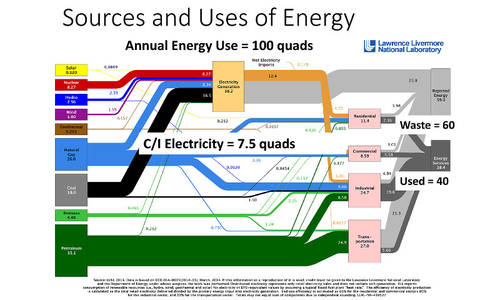 Fan efficiency is critical in HVAC and process air systems. The new proposed Department of Energy standard will drive changes in how engineers design air systems to minimize fan energy.

Fans consume about 18% of electricity purchased in commercial and industrial buildings. Most commercial fans also consume their initial cost in energy expense in less than 1 year. While fan efficiency varies with aerodynamic shape, under-sizing fans to reduce first cost has a stronger negative influence on fan efficiency. That is why the U.S. Department of Energy (DOE) is considering a novel approach, which would reward rightsizing fans in addition to improved aerodynamic design.

Consulting-Specifying Engineer published the first part in this series in June, which explained the peak-based metrics called fan-efficiency grade and fan motor efficiency grade (FEG and FMEG). These are documented in ISO 12759and the Air Movement and Control Association International (AMCA) standard 205, but were not chosen by fan manufacturers in their consensus recommendation to the DOE. Under the terms sheet resulting from a public DOE-sponsored Appliance Standards Rulemaking Federal Advisory Committee(ASRAC) negotiation, the DOE is expected to adopt a new fan-efficiency metric called a fan energy index, or FEI. FEI is the ratio of the maximum power allowed by the DOE standard to the actual power of the fan selection at every (any) combination of airflow and pressure rise, rather than at a defined test point or points (such as peak efficiency used by FEG and FMEG or some other defined flow and pressure).

The FEI metric, which applies to fans alone and fan/motor or fan/motor/drive combinations, effectively extends the conventional DOE regulatory approach beyond the fan design to address motor, transmission, variable speed drive, and fan selection. This new approach will be transformational to model codes and standards for energy efficiency including ASHRAE Standard 90.1: Energy Standard for Buildings Except Low-Rise Residential Buildings, ASHRAE Standard 189.1: Standard for the Design of High-Performance Green Buildings, and the International Energy Conservation Code.

Status and timing of the DOE rule

DOE announced its intention to regulate commercial and industrial fan efficiency on June 30, 2011. Since then, the AMCA worked to develop a consensus that was acceptable to fan manufacturers and efficiency advocates, which include the National Resource Defense Council, American Council for an Energy-Efficient Economy, Appliance Standards Awareness Project, Northeast Energy Efficiency Association, Southern California utilities, and others. For efficiency advocates, the objective was to save as much energy as possible. For fan manufacturers, the strategic intent became:

Ten AMCA members, seven HVAC manufacturers (members and staff of the Air-Conditioning, Heating & Refrigeration Institute), four efficiency advocates, and representatives from the National Environmental Balancing Bureau, Cooling Technology Institute, National Electrical Manufacturers Association, and DOE participated in 19 days of meetings between May and September 2015. The final consensus vote showed support for a comprehensive terms sheet from all except two participants. We expect that the consensus terms sheet will guide DOE’s draft of fan-efficiency regulation, to be published very soon.

The final rule will become mandatory 5 years after the final version is published However, DOE will invite manufacturers to use the DOE metric and test standard sooner and will accept certifications early (probably in 2017), so the engineers and utility rebate programs may begin to specify DOE-certified efficiency levels 3 to 4 years early.

All fans offered for sale at operating conditions that require 1 to nominally 200 brake horsepower will be covered by the rule unless they are on an exclusion list. The terms sheet recommends a long list of exclusions, either because fan energy is already part of another DOE regulation, the fan application requires a design that compromises efficiency, or because the fan type is so rarely used that its aggregate energy use is trivial.

The DOE standard will establish a maximum input power (called FEPstd, or fan electrical-input power) that varies with flow and pressure at the fan design point. That means that the regulation applies to an infinite set of conditions that define the particular design/selection points (airflows and pressure rises) offered for sale. The maximum fan shaft power allowed by DOE at the design point will be calculated in accordance with the following equation:

Unprecedented, but not a precedent

No other DOE regulation is applied at all conceivable operating conditions. Other rules choose representative test conditions, which provide a fair indicator of a product’s relative efficiency during operation.

Unfortunately, a fan’s efficiency does not behave like the efficiency of other products. Every fan can be both very efficient and very inefficient, depending on what flow and pressure at which it operates. This renders the traditional regulatory approach ineffective. That is why the DOE regulatory standard must be applied to any and all operating conditions. Certification of fan performance also must be done at any and all operating conditions offered for sale in the regulated range.

For those outside the fan industry, this may seem like an unreasonable regulatory burden, but not so for those who make, rate, and sell fans. Fans are ruled by well-ordered laws of physics, collectively called “the fan laws,” which enable one to run a 20-minute fan lab test at one speed and accurately rate that fan and other larger fans at untested speeds.

So, the peculiar nature of fan efficiency (which can be nearly anything, depending on conditions) comes with the blessing of fan laws that provide a means to deal with the challenge. Regulating to raise actual fan operating efficiency would not be practical without these laws.

While DOE will judge compliance strictly based on FEP (fan electrical power; electrical power supplied to the fan assembly), the DOE test standard will describe FEI as the ratio of the FEP standard (maximum power input allowed, as described above) over the FEP (actual power input) of the fan at its design point. This ratio is 1.0 or greater for all compliant fan selections. AMCA expects that FEI ratings will become the most common description of fan efficiency in the marketplace, because FEI uses this FEP standard as defined in the first DOE rule as the benchmark against which fan efficiency will be compared forever. We expect that the DOE regulation will require that FEI ratings must tie to FEP levels that are certified by the manufacturer to DOE.

Details of the FEI metric are documented in an AMCA white paper, downloadable from its website. DOE’s nomenclature is slightly different than in the white paper-DOE refers to FEI, which includes motor and drive losses, while the AMCA paper refers to fan-efficiency ratio (FER), which considers the fan only.

A fan with variable speed must still comply with the design-point FEP requirements. In other words, the DOE will regulate based on FEP at the design point only (full speed), but may authorize the use of an inflated FEI in marketing materials and product labels that benefit from variable-speed control.

FEI requirements also will appear in engineer specifications, rebate programs, in stretch codes, and in ASHRAE standards before the DOE rule goes into effect. Rebate programs are likely to require DOE certification of FEP and compliance with the DOE test standard requirements.

AMCA provided the Lawrence Berkeley National Lab-which analyzed data for the DOE-with a database of 1.3 million fan selections that were sold in 2012. This represented 46% of the United States market in the regulated range. This database enabled analysis of a statistically significant confidential sample of the market.

Note that the flow and pressure constants in the FEP formula (250 cfm and 0.4-in. pressure differential, respectively) effectively raise the power input allowed at lower flows and pressures. The flow constant produces a result that is similar to the FEG curves, recognizing that very small fans (and low flows) are less efficient due to the physics of airflow. FEGs are detailed in AMCA 205 and ISO 12749. The pressure constant increases the allowable power at lower pressure levels, recognizing the practical limitation of “zero efficiency at “zero” differential pressure. While low-pressure fans use less power as they increase in diameter, it is impractical to drive low-pressure fans to become too large. The pressure constant solves this issue.

Here is another way to think of this: A fan running at 0.2-in. of static pressure will be fan-power limited at a level that is three times greater than the target efficiency would indicate. (Note that 0.2 plus a pressure constant of 0.4 equals 0.6, which is three times greater than 0.2.) In other words, if the target efficiency in the DOE formula were 63%, the operating efficiency requirement for this selection at 0.2-in. would be only 21%. This may seem like an unreasonable “gift” for smaller fans and lower pressures, but higher losses at low flows, low pressures, and in small fans are inescapable. The pressure and flow constants in the FEP formula correctly represent the actual map of efficiency degradation exhibited by the most efficient aerodynamic fans available as flows and pressures decline.

Curing a noncompliant selection can be done with either a larger fan or a more aerodynamic design. Both a larger fan and a better aerodynamic shape have cost and strategic implications to fan manufacturers and their customers. The good news is that compliant fans are available in production today. This means the marketplace will determine what fan competitors do to boost efficiency while DOE will dictate the maximum power allowed, driving engineer specifications to demand higher efficiency either with a larger fan or a more aerodynamic shape.

Thermal design: Get the heat out of the electronics